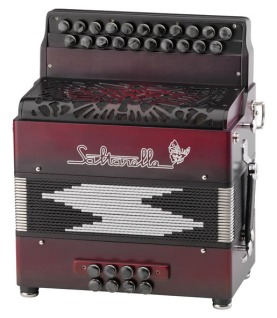 Squeeze circles are abuzz over the newest release from Saltarelle. Its configuration is identical to the Elfique (which is great), but provocatively, the new one is called Inferno. And dammit if it doesn’t look very, very cool. The ad copy calls it a 19+2 button box, though it’s clearly a 21 button box (which means that the “extra” buttons are at the chin-end of the rows, rather than set aside in the middle). It’s 3-voices, with one stop. They say this means you can play it MMM or MLM, but that doesn’t make sense, since you’d need 4-voices in order to pull that off. Three voices would mean you could play MLM, MM, or LM. An MMM box would, I have to say, be pretty dang sweet!* I’d be curious to know what the real specs are.

So, an Elfique with a dark paint job, black buttons, and a reference to Dante has got my mouth watering. Pretty sure that tells you more about me than it does about the box, but dammit if it doesn’t look VERY cool.

*If all of this tech talk is baffling to you, check out Accordion Speak 101. 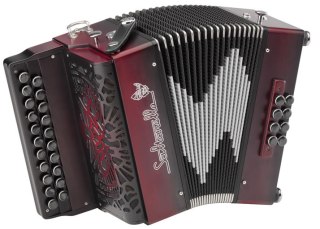 UPDATE: Tom (in comments) asked for a better picture of the grillwork on this demonic beast. I found this at the Saltarelle site.

UPDATE 2: I want to stress that I don’t work for Saltarelle or get any kick backs, but I find this whole ad campaign very amusing! Check out the front page ad copy below. 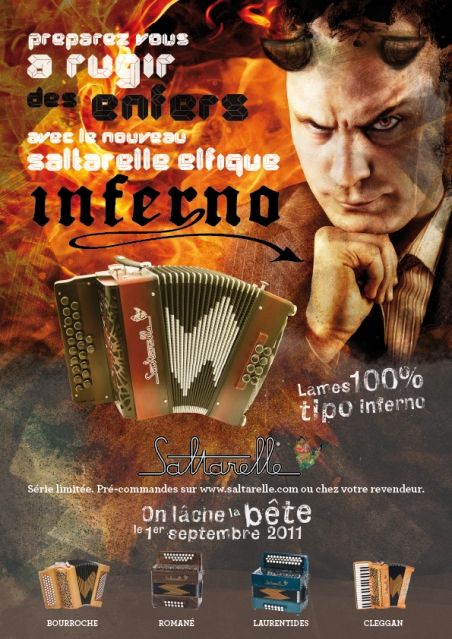 In my interview with Frédéric Paris, he referred to adapting the repertoire of various instruments to the diatonic accordion. This was back in the seventies when the “tradition” of French diato was being mapped out by the likes of Paris and Jean Blanchard, et al. What struck me was how apt the word “adapt” is to the process of taking a tune found on vielle or cornemuse and making it work on the diatonic box. About a year ago, I started paying attention to this mazurka, “Bec à bec,” on the La Chavanée recording, Rage de danse. Here it is:

Just listening back to it now, as I write, I am stunned at just how perfect a piece of music this is. It is heartbreakingly beautiful. Everything I love about French music is there.

But it’s not very accordéon-ish. How to make it work on the box? La Chavanée gives us two bagpipes playing single, entwined melody lines — of all folk musics, I think it’s fair to say that tradFrench is the lord of the counter-melody — and no chords, per se, though a harmony could be sketched out. That’s not what I did, though. Rather, I got my hands around the melody, and worked out the bass and chords according to my ear. Here’s what I came up with:

Not nearly as majestic as the pipes, but what is?

Meanwhile, in Alsace, the doyens of the biannual Pique-diatonique gathering had chosen “Bec à bec” as one of the three new tunes for the October 9 gathering. The sheet music they posted, which included tab and dots, showed that they had “adapted” the tune differently than I did. For example, in the third bar I play an F chord over the “D”-based melody phrase. In the Pique-diatonique transcription they use a “G”-chord. Again, in the third bar of the b-section, the Pique-diatonique transcription uses a G chord, which, with the “F”-natural suggests a G7. I chose an F chord, which, with the “D”s hints at a D minor. Either works. But they’re different.

I’m not making any arguments here, other than this: there are any number of choices you make when you adapt a tune to the box. Another example, I notice that in the fourth bar of the Pique-diatonique transcription, they play across rows, rather than down the one row, as I do. I think my playing sounds a little galumphy at that point. Time to try it their way.

Another Breton tune, learned from clarinetist Steve Gruverman (tune finder extraordinaire). The hanter dro is that rare thing, an intimate line dance. Moving to the 3/2 meter, the dancers snake around the floor, spiraling, encircling, ensorceling the musicians. I try to embody the apparent Breton motto — “repetition is the soul of wit” — by matching an entrancing melody with a sweet, innocent harmony. Against current practice, I am a big fan of 3rds in my chords.

The Theme of the Month over on Melodeon.net is Tunes from Brittany and I urge anyone who enjoys that sort of thing to head over for a listen. The tunes and videos being posted are wonderful. Also, Andy of Vermont recently posted a Yann Dour tune played on his 3-row Castagnari Jacky. Check it out.